It lights this amazing world on

“What about riding a bicycle in Mongolia next summer?” that was a question of my friend Amaia. “Why not?”.  It was in January 2014. Few months later, we flew from Paris to Ulaan Bataar, with our bicycles packed in the plane.

Thanks to Mugi, we visited the great statue of Ghenghis Khaan, 50km away from the city. We need few days to get ready to leave UB, once the bicycles fixed and the equipment ready. Of course, we were not ready to go on our own, but we were to pride to say it so we just go West.

Mongolian people are so friendly, we had everyday opportunities to visit a yurt, make friends and share food.

Everytime we put up our tent, someone came to say hello by foot, motorbike or horse.

The city of Bulgan, the first one we stopped after leaving Ulaan-Bataar.

Theater of Bulgan. While drawing this monument, a bunch of children were playing around me, some of them drew on my sketchbook.

The roads we took were sometimes….muddy! We did some mistakes by taking roads going to yurts and not villages 😛

I try to draw more people, it’s still difficult for me.

It’s always nice to have a break in a restaurant, to split a full-riding day.

I still didn’t find a way to represent the infinity of the steppes. The color above are not nice, and I couldn’t show how it’s possible to see to 15km around.

We ended to camp in front of this wood house after a funny story.
We put our tent as always – in the middle of nowhere, and went back to bed.
After night time, we heard two voices: “you, you, move!”. We weren’t asleep, and figured out to communicate with two teenagers. “Wolf, wolf, eat you!!”. There were really afraid we were attacked by wolves during the night, so their parents sent them to pick us, so we could be protected by the dog and the gun of the family.
Ok then…. The next morning we enjoy the company of the family whom we had fun with.

Amaia and I arrived then in Hovsghol lake, up to North of Mongolia. We met in an hostel Alan and René, two travelers from the USA and Germany. They planned to go for a hors trip, so we joined them. We basically put the bags of the bicycles on top of two horses, and we were ready for a 5-days trip West to the lake.

A monument up an hill.

That soviet bus is used to move tourists in Mongolia.

Quick sketch of my bicycle.

Few days before going back to UB, we visited the ancient city of Karakorum, with bouddhist monuments.

6 weeks in Mongolia were finally not enough to discover this amazing country. We did 1444km with the bicycles, 125km with horses and 400km with a jeep. Traveling with bicycle appears to me to be awesome, even if I was more exhausted to draw after effort. It was great to be independent, with our tent, strove, and everything we need with us. I would recommande for sure this destination, far from touristic roads and full of surprises. 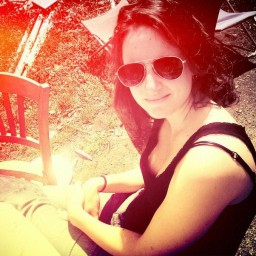 Hi there, I'm Faustine Clavert. To know more about me, please go to "About me". :)